June: Brown finishes study of Mandarin at the University of Colorado; the Navy assigns him to Washington, D.C. to translate Chinese telegrams into English

August 4: Termination of service in the U.S. Navy

Fall: Brown returns to the University of Utah

Brown transfers to University of California

Brown recieves B.A. degree from the University of California, Berkeley

“In 1949, Marvin set out to prove the Army Method of language acquisition which basically held that the purpose of language study is just to prepare for later success in the country.” (History, ALG, alg.or.th)

Brown begins studying Thai under linguist Mary Haas at the University of California:

By this time I had studied 8 languages using the same old ‘grammar translation’ method (memorize words and grammar rules, translate sentences back and forth, and pass tests). But Thai under Mary Haas was something else. It was mostly practice. Mary told me that all I had to do to master a language was to practice until I got near-perfect pronunciation and then immerse myself in the country for a year. This reminded me of the bicycle cascade 4 years earlier: study first, then bathe in cascades. I decided to become the unofficial guinea pig for the Army Method. I would study Thai with Mary until I ‘mastered’ the pronunciation and then spend a year of immersion in Thailand. (Ch.3, From The Outside In)

Brown recieves M.A. degree from the University of California, Berkeley

Brown returns to Bangkok on a Fulbright Fellowship

September: “I returned to Cornell to teach Thai and Burmese and finish off my dissertation.” 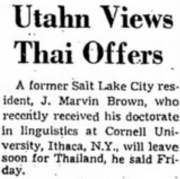 January: Completes Ph.D. in linguistics at Cornell University with doctoral dissertation From Ancient Thai to Modern Dialects: A Theory

March: Brown returns to Bangkok and is hired at AUA Language Center as staff linguist

Brown writes “Phonemics Without Sounds”, later published in a reprint of his dissertation.

Following publication of his dissertation, Brown refuses an offer from Division of Asian and Pacific Languages at the University of Hawaii for position as head of department of Southeast Asian Languages (Ch. 3, From The Outside In)

Brown meets Adrian S. “Buzz” Palmer, who would introduce him to Krashen’s work on comprehensible input and the natural approach.

I was looking in the “Letters” section of Science in 1974 and I saw a reference to the book, Behavior: The Control of Perception by William Powers. It used the expression ‘a hierarchy of control systems’: three of my favorite words and all in the same expression. It reminded me of my 1965 article, ‘Phonemics Without Sounds’, which no one had understood. I sent a copy to Powers. He understood, he was impressed, and a correspondence began. He knew the importance of language to his theory and he had been looking for a linguist who could understand him. We clicked. I got a copy of his book and studied it for two years. (Ch. 5, From The Outside In)

Fall: Brown begins studying Japanese at the University of Utah

April: During his twelfth quarter at University of Utah, Brown decides to quit his studies 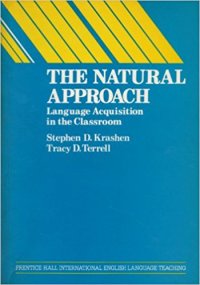 December 14: Brown hits “rock bottom”: “I couldn’t wait for the students’ appraisals to come in. I got them on December 14, 1983, and with my heart beating wildly I read them. They all hated me and my practice—even those who had done it perfectly. And they all loved the delightful Japanese teacher with her charm and her natural talk. I cried myself to sleep that night.”

December 15: Brown reads The Natural Approach: Language Acquisition in the Classroom by Stephen D. Krashen and Tracy D. Terrell, leading to “a sudden conversion” to teaching language through comprehensible input.

November: Brown teaches five-week demonstration term of Thai at AUA using natural approach for 15 students and almost 100 observers consisting of mostly linguists and university language teachers (Ch. 7, From The Outside In)

July: Start of first year-long natural approach class of over 1000 hours at AUA

“By the time the book finally came out, I had taught Natural Approach Thai at AUA for two more years, and we had become so different from Krashen and Terrell that we needed a new name. We called it ‘The Listening Approach’, and the book by this name came out in 1988.” (Brown, Ch.6, From The Outside In)

Brown learns Shantou (Swatow) Chinese through natural approach beginning around 1989; “I continued for 8 years at 1 to 2 hours a day.” (Ch. 7, From The Outside In)

Online submission of a partial version of Brown’s autobiography From the Outside In: The Secret to Automatic Language Growth to ERIC (Education Resources Information Center), a digital library sponsored by the Institute of Education Sciences of the United States Department of Education.