Could the lack of interesting and understandable content explain a common behaviour among language learners?

A good friend not long ago remarked that he’s “starving for comprehensible input”—opportunities to hear the language he’s learning in ways that are both highly interesting and highly understandable at his level.

He lives in Bangkok, just a few stops away from a one-of-a-kind program that provides hundreds of hours of Thai input in ways even beginners can understand no matter their first language, but a busy schedule keeps him from going there.

He occasionally takes lessons with a Thai tutor who understands the importance of comprehensible input, but is also too busy to do much about it—booked solid with students who demand not to hear a lot of Thai in understandable ways, but rather, to get explanations of how the language works and how to say things in it.

Second language acquisition research shows that we acquire languages and become fluent in them not through study and practice of words and grammar rules, but through massive comprehensible input.

So where is all the comprehensible input?

Knowing how to say things in a language can help us indirectly to acquire it when it helps us interact with speakers of the language, build relationships with them in their language, and get a lot of comprehensible input as a result.

Unlike children, as adults we often find we need to speak a language in order to get other people to speak it to us.

Even then, the language we hear back is often much less rich in comprehensible input than what children would get.

It’s often focused on more abstract matters, rather than what we can see and experience around us in the here and now.

This lack of comprehensible input for adults is not only in the quality and quantity of interactions we get, but also in the dearth of content.

I’ve often noted how despite the abundance of people and technology to make it possible, there’s a great lack of content that’s both highly interesting and highly compelling for adult beginners in second languages.

As adults who want to acquire new languages, it often seems that we are in a comprehensible input desert.

We are indeed starving for comprehensible input!

When I think of this starvation metaphor, I think it might offer an explanation for a behaviour that others have noted and I am myself guilty of.

This is because I’m reminded of a clinical study I read about known as the Minnesota Starvation Experiment.

This experiment was led by psychologist Ancel Keys to help relief workers dealing with starving populations at the end of World War II by providing data on things like the psychological and behavioural consequences of food deprivation.

After a three-month control period, the conscientious objectors who had volunteered for the study had their daily caloric intake cut by about half, so that they were subsisting on approximately 1600 calories per day for six months.

Their behaviour changed drastically, as Kelsey Miller describes in a Refinery29 article on the study:

Food became the sole source of fascination and motivation. Many men began obsessively collecting recipes (“Stayed up until 5 a.m. last night studying cookbooks,” wrote one). They found themselves distracted by constant daydreams of food. Some sublimated their cravings by purchasing or stealing food; one man began stealing cups from coffee shops. They guzzled water, seeking fullness. Some took up smoking to stave off hunger and others chewed up to 30 packs of gum a day until the laboratory banned it.

It’s not hard to see a parallel between the obsessive recipe collecting and cookbook study and the hoarding and study of language learning materials like grammar books.

But given the absence of rich sources of comprehensible input for language learners, especially at the beginner level, many people may turn to books about language and other materials as substitutes.

But what happens when we truly desire to acquire a language through hearing it in ways that we can understand it and pick it up?

A hunger for comprehensible input

As someone who has had tastes of what kind of comprehensible input could exist, I have experienced the hunger pangs—the acute awareness of when it’s not available at high levels of interest and comprehensibility.

About ten years ago, I read linguist Dr. J. Marvin Brown’s autobiography about developing the Automatic Language Growth approach to language learning, and his vision for providing language learners with not just comprehensible input, but compelling and memorable real-life experiences through which to pick up languages.

Excited, I set out to carry out this approach of picking up languages in a childlike way of watching and listening, without study, practice, or translation.

I first tried this with Mandarin through watching Chinese TV shows, which was very inefficient because they aren’t designed to be highly understandable to people who don’t know the language at all.

But I eventually did acquire enough Mandarin that I could have conversations with tutors using Crosstalk, meaning I spoke English and they spoke Chinese, and I could understand them even over a voice call without any visuals to aid understanding.

Then I went to Thailand to attend the AUA Thai Program—that one-of-a-kind program I mentioned—which uses the ALG approach, and I found that while a lot of the content and teaching was wonderful, it was limited in reaching the level of comprehensible input that Brown had envisioned for it.

Still, in all these experiences, I had tantalizing glimpses of what kind of comprehensible input could exist in abundance: highly understandable even to total beginners, and so compelling that you forget you’re learning a language.

These were the kinds of experiences that made me think to myself, this is what language learning should be like.

But because the input available to me was often not as interesting and as comprehensible as what I saw could be, when I did encounter input that was more ideal, especially when it was really comprehensible, I had an acute awareness of it, as a food-deprived person might experience when coming across a rich source of food.

Again, I see some parallels here with the starvation experiment in how the subjects developed an abnormal preoccupation with what food was available to them.

In her article, Miller describes “the increasingly strange eating habits that many men developed”:

“They would coddle [the food] like a baby or handle it and look over it as they would some gold. They played with it like kids making mud pies,” wrote one subject. As the months went on, eating became an even more ritualized and often grotesque affair. Plate-licking was commonplace as the men sought out ways to extend mealtime and or feel fuller. They diluted potatoes with water, held bites in their mouths for a long time without swallowing, or labored over combining the food on their plate, “making weird and seemingly distasteful concoctions,” the researchers reported.

For me, when I did encounter content or teaching that was especially comprehensible, it was tempting to try to hold on to it, to ruminate, to feel anxious that it was going to end, or if it was a video, to watch it repeatedly too many times, rather than just taking it for what it was.

The hoarding behaviour also applies for me with comprehensible input: when I find some highly comprehensible videos online in a language I am learning or want to learn, it’s tempting to save them, worrying that they might disappear or that there might be nothing else like it.

When it’s felt like content that’s both highly interesting and highly understandable to me has been available in abundance, as it was at times in the AUA Thai Program, it was easy to relax and just be in the moment and enjoy it.

A future of abundant comprehensible input 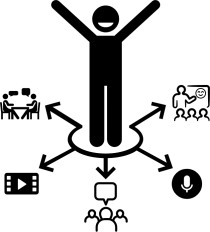 If we work together, I believe that very soon the day will come that an abundance of comprehensible input will be available in many languages to all of us—a cornucopia of content that’s comprehensible and compelling.

Unlike food, we have the advantage that each item of content can be consumed more than once, and endlessly duplicated, feeding countless minds.

With enough content that’s both highly understandable and interesting for even someone just starting out in a language, I think that for many future learners, picking up a grammar or dictionary as a first step to learning a language will be out of the question.

Instead, they’ll just start with understandable content and experiences that they find interesting in the language.

This compelling comprehensible input will get them hooked, and without them even realizing it, start to give them a deeper sense of meaning than translations could provide and a more natural sense of grammar than a book could ever give.

Before they realize it, they might begin to be functional in their new language, and as I did with Thai, one day happen to look through a book about the language and find that so many of the explanations just make sense on an intuitive level.